Zombie Loan Debt can Haunt You 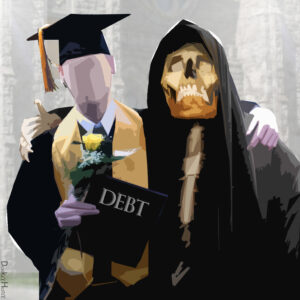 In movies and shows like The Walking Dead, some problems will just not stay buried. We may not have zombies in our world, but we have something just as terrifying: zombie loan debt.

Just like the walking dead, zombie loan debt seems to be dead and buried, only to come crawling back after you.

What is Zombie Loan Debt?

Student loans are a plague upon the nation, and ravage entire communities and economies!

Perhaps that is a little dramatic, but the loan debt in this country has long ago reached crisis levels. Millions of Americans are drowning in debt, with well over 1 million people owing more than six figures!

Zombie loan debt is when an old loan comes back to haunt you.

You thought it was settled, gone, or paid for. And yet here it is, coming back for you with the force of angry lawyers behind it.

What Causes This Kind of Debt?

Sometimes you get caught off guard by a loan you previously escaped from. Maybe it is very old and it just slipped your mind.

Or maybe you paid it off in full, and they are claiming you did not.

This is not as rare an occurrence as you might think. Make sure to retain ALL of your financial records and documents, even after the debt has been settled. If the lender comes after you wanting more money, only the right documentation can put that zombie back in the grave.

Other times a lender will go after an old customers for extra fees they believe they are owed.

What Can You Do to Fight Back?

First, ask for written proof or evidence of what you allegedly owe.

Never acknowledge the zombie debt, or agree that it is actually yours. Whatever you do, don’t put those things in writing or make any payments, not without consulting a lawyer or accountant first.