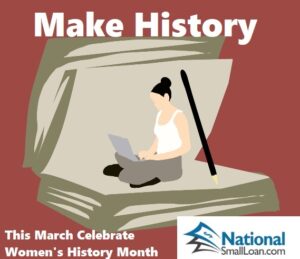 Every year March is the time designated to celebrate the achievements of women in our country, and around the world. Here at National Small Loan, we think every month should be Womens History Month. The majority of our clients are women, and we hope that if you were to ask any of them, they would tell you that our company is one that treats all women with the respect they deserve.

But women being treated with respect was not always the case!


It was in fact very recently that females were given equal standing with males on issues of loans, banking, and money. How recently? Read on and you may be surprised!

Womens History in the US

How long did it take the United States to follow suit? Only about 80 years.

Can you imagine that all the way through the 1950s American women were not allowed their own private bank accounts?

Where do We Go From Here?

Part of growing, changing, and evolving is understanding the past. So instead of getting angry that women have been treated as second class citizens by banks and lenders for so long, let’s get motivated to keep fighting for change.

Don’t let womens history be confined to a single month, let us celebrate it all year long.
Apply Today